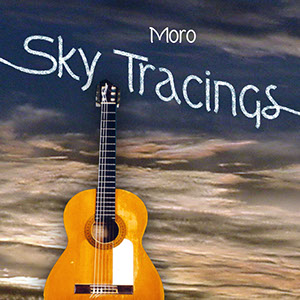 SKY TRACINGS was a while in the making.  It's been a while since Moro has released an album. After all, it takes time to come up with just the right mix of compositions, and with his usual aplomb, Moro has done just that. Ear-dazzling displays of tremolo beckon the listener into this album in the first piece, Picadores. And that's just the beginning. Moro proceeds to surprise us again and again, with shifts in mood and melody -- with seemingly unmatchable speed -- with slow, introspective passages, and of course, his signature romantic style. This is music that leaves an impression, that touches the deepest and most hidden unspoken parts of the heart, that lends wings to the soul. Every composition here has a journey to share, and we, the lucky listeners, are borne along. This is music that invites us to sit back, enjoy a cup of tranquility, of romance, of passion -- and to fly within it.

This album is available from the moromusic store on CD and as mp3 download.  Click on any song name below to listen to a sample.

"It's been eight years since Moro released his last CD. "Sky Tracings," the new recording by the Bodega Bay composer and classical guitarist, is an exquisite collection of timeless songs ranging from sambas and ballads to adaptations of the classics 'Malagueña' and 'Arabias.'

From the opening piece, 'Picadores,' with its deftly finger-picked tremolos, Moro changes mood and melody throughout the 66-minute, 14-song compilation. There are slow, introspective passages and soaring, dynamic flamenco sections. On some songs, the listener would swear there are two guitars playing instead of one...

...In Moro's hands, its sound has a lightness and warmth unlike most classical guitars."

"I bought Sky Tracings for my grandson. I knew he would love it and he did. His father is a percussionist and he has lived with music. He has played some piano and enjoys his fathers' drum set but he most enjoys guitar."