Moro has received accolades from around the world.  Below are just a few of the reviews and comments about the man and his music.

"He is tying the world together with a one-man thread."

"During the two centuries in which they flourished there were about 400 of these troubadours. Today, there is roughly one. His name is MORO."

"...Beautiful...his performance was a model of pure, harmonious playing. His tone sings...."

“He presents thrillingly delicate flights of spirit that are simply without equal, airing his own richly tuneful compositions with notes played so gently they seem at times to be unstruck.”

"He's tall and handsome, with the magnetism of a Pied Piper. Everywhere he goes people gather around. For life is all harmony in the company of Moro."

“His demeanor, spell, and aura of romance invariably make him popular.”
--TIMES OF INDIA – Mumbai

“His 90 minute, strictly instrumental solo guitar recital was an aural journey to mystical worlds…  Playing his own compositions in a mix of flamenco, classical and baroque styling, Moro displayed an ear boggling technical mastery of his guitar… He puts on a concert that one has to experience because his real magic comes not in his fancy guitar pyrotechnics, but in the deep moods and emotions the music evokes…”--

"The guitar of Moro travels the world; a touch of flamenco, a hint of classics, some new world, and always gently expressive with warmth and romance..." 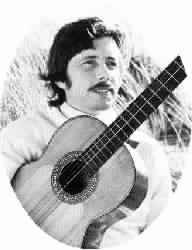 “…Beautiful…his performance was a model of pure, harmonious playing.  His tone sings…”

"Our friend Phil Stout has programmed Moro's recordings on his 'Beautiful Music' outlets in the USA for many years, and it is easy to understand why.  Moro himself admits that he is "more of a dreamer than a brilliant student of Segovia", but the haunting melodies he creates from his acoustic guitar  are just the remedy for relaxing quietly towards the end of the day..."