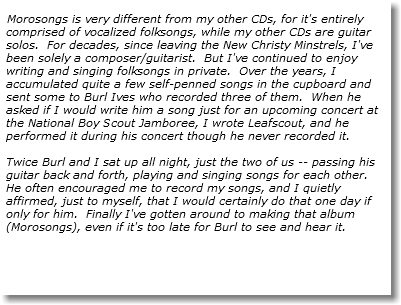 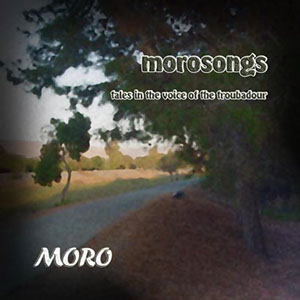 MOROSONGS - TALES IN THE VOICE OF THE TROUBADOUR is a unique album of Moro's work.  Chronicles abound of the troubadours who wandered Europe in the middle ages.  These wandering minstrels brought news with them from place to place, often in the form of lyrical poems, because they sang as well as played their instruments to gain their bread and board.  Some of that old news still exists today in the form of the classical ballad.  Are they true stories?  A few do have traceable histories, though most were passed down only verbally—so perhaps yes, perhaps no, perhaps partly true and partly embellished for the sake of art.  That art, like the ballads themselves, still exists; and although the troubadour of lore is not so common now as he was in the middle ages, he still exists as well, and lives to share his tales through song.

Moro's songs in this collection are tales as told by a modern troubadour.  Listening to them, we can find bits and pieces of ourselves, as if somehow the minstrel knows our thoughts, those secret places in the heart where the real person truly lives.  Human nature, after all, has hardly changed since the earliest days of the first troubadour.

Click on any song title below to hear a sample.

Moro has released several LPs and CDs of his classical and neoclassical guitar music since the 1970s, but "Morosongs" is the first time the Bodega Bay composer-musician has combined his vocals with his guitar playing on an entire album.

Moro's vocals are a pleasant surprise. His voice is gentle but passionate and it complements his fingerpicking on a collection of 25 original songs.

The first track is "The Man," a mysterious song about a man who wins "a woman of consequence" at a carnival game of fortune. "Buckeye Jim" is a bittersweet murder ballad. In "The Vagabond," he sings, "He had to live so he could learn to love and love so he could learn to live." He adapts John Masefield's famous poem to music in "Sea Fever."

Moro has been a guitarist, but not a singer, for most of his career. "Back in the 1960s, people used to tell me, 'If you can play the guitar like that, how dare you sing.' And when 'Vermouth Rondo' (and other solo guitar recordings) started getting airplay and I started earning royalties, it was clear they were right."

But he continued to write songs with lyrics and finally decided to record a CD with vocals and guitar. "Morosongs: Tales in the Voice of the Troubadour" is available exclusively from his Web site: www.moromusic.com.