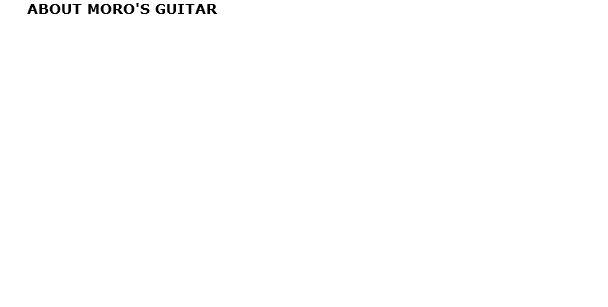 Moro's favorite guitar, made by master luthier Marcelo Barbero. In the photo on the right, what appears to be a red spot in the sound hole is actually the glow of the candle behind the guitar.

MORO plays an Andalusian guitar made by master luthier MARCELO BARBERO. This priceless instrument is made of wood so clear and thin that one can see the light of a candle through it; look at the sound hole in the photo above, right... Here, in his own words, is the story of how he came by this magnificent and rare guitar.  Look for some ear candy on our site, too...

"The parts for it were cut from carefully chosen pine and spruce, during the 1840's, and put in storage for one century. Then, in the 1940's, they were assembled, glued, sanded down and varnished by the great master luthier, Marcelo Barbero of Madrid. He constructed guitars in the old Grenadine Andalusian style, in keeping with the old traditions of the art of building fine guitars. 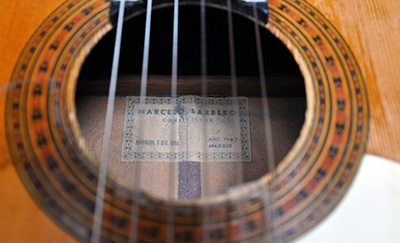 "His best friend was an up-and-coming child prodigy of the flamenco guitar, Ricardo Modrego, to whom he gave no fewer than three of his guitars. Ricardo made several world concert tours, playing his favorite of these. During his 1962 tour of Asia, he performed at Tokyo's Hibya Theatre. I happened to be walking along, saw the poster in front of the theatre, and was allowed to wander in without paying during the last minutes of the concert. He was a great artist, and the S.R.O. audience breathlessly exulted in every note. After demanding several encores, they packed into his dressing room. I waited until it was all over and then went in to see him. He let me play this great Barbero guitar. The golden tones came from outside the box, not from the inside as with other guitars!

"I told him I'd make payments to him for life if I could only have this instrument. Amazed, he replied that it was his greatest treasure and not for sale. However we played at some of the same places, becoming friends during the ensuing weeks. On our last night together in Tokyo, he told me over dinner that if we ever met again, at some other place in the future, he would be so pleased that I could have the guitar at that time. As he was headed home to Madrid, and I to Australia, it was unlikely that this would ever happen. But the world is a small place for guitarists. Three years later, I happened to be in Los Angeles and read in the TIMES of his appearances at the brand new Dorothy Chandler Pavilion (December,1965). He was so happy to see me! He insisted I have the guitar if I would only please wait until after his closing performance -- a matinée the following Sunday afternoon -- after which he would be flying home to Madrid and his remaining two Barberos. We resolved never to reveal the price, as such a fine instrument really has no price. So people must evaluate the instrument based on what its tone does for them -- solely that.

"So you see, it’s really a simple story. Marcelo Barbero died in 1956. His only formal apprentice was Archangel Fernandez.  Archangel retired in 2011 and no longer makes guitars. When Carlos Montoya accidentally put his foot through his old Barbero in the 1970s, he got his replacement guitar from Archangel who in those years still made lovely flamenco guitars."