"A good traveler has no fixed plans and is not intent on arriving."

Moro Buddy Bohn’s book tells his story.  It’s about his troubadour years during which he backpacked with guitar around the world through 50 nations without ever once using money as a means of exchange in order to prove, just for himself, that our roads are paved by Love.

The celebrated author and visionary, Saturday Review Editor Norman Cousins, on reading Moro’s travel journals wrote, “It’s a most diverting and picaresque tale, one that reads like a sentimental journey of a hundred years ago.”

Upon publication in 2012, Kin to the Wind became a Finalist in ForeWord Magazine's Book of the Year Awards in the category Performing Arts & Music

We invite you to pick up your copy from Amazon.com today!

Moro's beautiful album Kin to the Wind is intended as a companion to this book.  Don't forget the music! 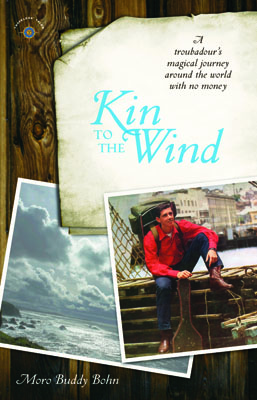 Excerpted from Kin to the Wind review at http://higginsunhinged.blogspot.com/  (May 11, 2015)

Frankly, I couldn't put the book down.  It's well written and moves from one exciting encounter to another; some so bizarre that you wonder how Bohn could have extricated himself from nefarious men and political subjugation.

The subtitle of his book is, "A troubadour's magical journey around the world with no money."  How many people would have the courage and confidence to grab a guitar and embark on world travel with no money and only the hope that somehow your talent alone could be traded for food and lodging?  We aren't talking about only nice civilized countries, but many place where you might be killed for your shoes.  And Bohn was only 21 years old.

Combining his youthful exuberance, curiosity, and enthusiasm, his dreams to travel the world using his guitar as his sole medium of exchange were realized beyond his wildest expectations. The fact of his inability to anticipate and foresee many of the challenges that lay ahead could have been cause for him to reconsider such a journey.  But he took the unknowns head-on and succeeded in using his guitar and personality to explore cultures that most of us will never experience.  You will see by reading that Buddy has an unusually strong faith in the goodness of people, a great capacity for love, and an optimism that seems to conquer the negative experiences he encountered.

He crossed the Arabian Desert with a camel caravan of champagne-smuggling Bedouins and performed with gypsies in Spain.  He played for Pablo Picasso in France and was a featured circus act in Italy.  His audiences also included Queen Elizabeth II of England, King Frederick IX of Denmark and the maharaja of Sandur.  He was the first to entertain U. S. troops in Vietnam, and he found himself court troubadour to King Bhumibol and Queen Sirikit of Siam.  During his subsequent professional years he’s played privately for Howard Hughes, a number of movie and recording stars, miscellaneous celebrities, and, as if that wasn't enough,  he fell in love with a princess.

But Buddy's travels were not all wine, women, and song.  He had numerous encounters with authorities and was encouraged by the communists in Berlin to defect; he was attacked and almost killed by Tunisians, and he met a ghost in the Himalayas.

Among the many interesting people he met in his travels, one stands out as a refreshing oasis in an otherwise rugged landscape.  It was in the Casbah of Algiers during the brutal seven-year civil war for independence.  Sonya was a legendary belly dancer who performed completely naked at the Fantasio, the most opulent nightclub in Africa.  Buddy's "magic" guitar facilitated a unique connection between the two.  They spent much time together and Buddy's guitar music was soon incorporated in her act.  He played and she danced until the end of her engagement in Algiers.

All good things must end.  Buddy describes their parting: ". . . we said goodbye as easily as a pair of windblown clouds in the sky that touched only for a moment."  The parting was not without pain, but the world continued to beckon. And so beckoned  another young lady named Zoe, who arrived later in Buddy's travels.

The book provides an interesting glimpse into parts of the world that most of us will never see.  The cultural idiosyncrasies add flavor to the variety of countries Buddy traveled during his two year stint as a pure and uncompromising troubadour.

“Your book reached me. You have packed between its covers a saga, that makes the adventures in the Arabian Nights, the Odyssey, and the travels of Marco Polo dull by comparison.”
-- Ravi Vilayanur, Shakespearian scholar and writer, Hyderabad, India

“Your book is causing sleep problems for me.  I get up in the middle of the night and start reading.  I stay up later than normal because I can’t put it down. I’m drawn from one adventure to the next.  It’s an amazing story.”
-- Ralph Higgins, author and musician

“Hi Moro, One of my two sons, (both guitar players) stumbled across Kin to the Wind and delightedly showed the extract about EASTBOURNE to me. I was thrilled to catch up with you again and send my congratulations on completing your travels and describing them so entertainingly.

I brought the Ship home without bending her too much but, sadly, she's been melted down into razor blades or something utilitarian.

You were a high-point in a memorable Commission. Thank you.”

"Moro, just finished reading your book about your travels. Could not put it down. Felt as though I was there with you...So descriptive.  I am even more in awe of you and can see why you play tennis so well... Rallying with Margaret Court?  Wow.  You might be almost 80 but you play like 25."