A gifted virtuoso guitarist and composer, Moro first played (and wrote his first composition!) when he was seven and performed his first of many concerts when he was twelve. For years he traveled the world as a troubadour, using only his guitar performances as currency. This talented former member of the world-famous New Christy Minstrels has played in over 50 countries—in royal palaces, African casbahs, and even on a British warship in trade for his passage across the Indian Ocean. Bedouin champagne smugglers took him across the Arabian Desert in their camel caravan, listening to his music beneath desert stars.

While he was in Bangkok giving a command performance for King Bhumibol and Queen Sirikit of Thailand, the U.S. military invited him to play for the troops at their jungle camps, making him the first entertainer to perform for American forces in the Vietnam conflict.

He was also the first entertainer to appear at Paul Newman's famous 1960s exclusive Hollywood discotheque, The Factory, where he played nightly. He followed that with an engagement at Howard Hughes' Cabaret Room in Las Vegas where Mr. Hughes personally came to hear him.

An Italian duchess who found him performing with a street-dancing flamenco troupe of gypsies in 1961 assisted him in obtaining a visa for Algeria where he then toured—during the violent Seven Years' War—and S.A.O. terrorists captured and held him. He played for them, literally for his life, whereupon they gave him money and let him go. He found sanctuary in the Casbah of Algiers and met Sonya, the famous cabaret belly dancer, who was so delighted with his composition, Mosquito's Dream, she included him in her act and danced to it nightly.

During his troubadour travels he wrote many articles that were published in the Kansas City Star, Santa Rosa Press Democrat, and The Christian Science Monitor. He became the subject of an international media blitz during the 1960's (when he was known as Buddy Bohn), and was featured in TIME magazine.

He's won critical acclaim around the globe, not only for his mastery of the guitar but for his compositions as well, having won 33 consecutive ASCAP Awards.

Burl Ives recorded some of his songs.

The Moro discography includes 12 albums, several EPs and single recordings in many countries, and he now records his own works for the BUDWICK label exclusively.

In 1971 he recorded his Vermouth Rondo with members of the London Philharmonic Orchestra for Purple/EMI/Capitol Records. It became his first international radio hit and is currently in re-release.

His Hosanna Blue became the world's most aired solo guitar recording in 1981 and remained so for three years until 1984.

His Gavotte, Featherfoot, Tune the Gypsy Played, Vermouth Rondo and Trebeck Street Waltz have been on rotation for nine years, and continue to rotate, on Direct TV satellite service as well as Comcast and Time Warner cable services, via Music Choice Light Classical Channel.

His Esperanza has enjoyed eighteen years of continuous rotation at DMX Tranquility Channel where it still airs.

The DMX Folk Rock and Acoustic Crossroads channels are both airing The Man from his album MOROSONGS--Tales in the Voice of the Troubadour.

He's now a published author as well. His book, Kin to the Wind, his self-penned, first-person account of his troubadour adventures, is now published by Travelers' Tales Books. A 2012 Book of the Year Award finalist in the category of Adult Nonfiction--Music and Performance, it's available at fine online retailers in both paperback and e-book formats.

Saturday Review editor Norman Cousins described his early travel journals (the basis of Kin to the Wind) as "a most diverting and picaresque tale, one that reads like a sentimental journey of a hundred years ago." 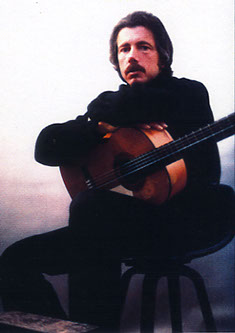